Both our Senior and Reserve sides got off to winning starts to their league campaigns. 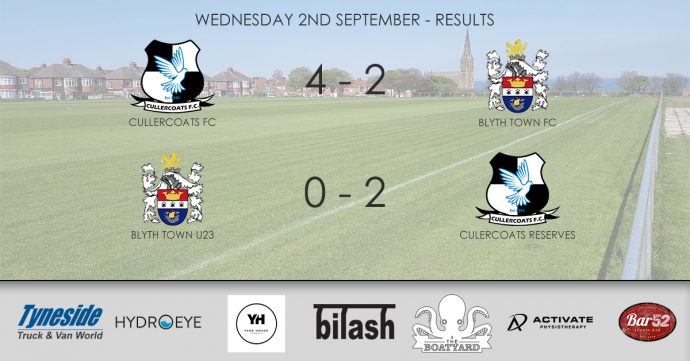 Both our Senior and Reserves sides, playing in the Northern Alliance Premier and third division respectively, got off to winning starts to the league season.

Our Senior Team faced Blyth Town at Links Avenue for their season opener. Three first half goals from Michael Laws (2) and Hylton Hub (1) gave the Doves a commanding lead going into half time.

Blyth pulled a goal back straight after the break, before Laws completed his hat trick on 56 minutes. A penalty from Blyth brought the score back to 4-2 on the hour, but Cullercoats managed the game well and the score remained the same to the finish.

Our Reserve side were up against a young Blyth Town U23 side, in their first game in the Northern Alliance third division. Cullercoats controlled the game from the start, and never looked like conceding. A cross into the box from the left from Alex Mcewan found Darren Holmes coming in from the right, who laid off Andy Tallen to finish and put the Doves ahead.

Blyth mostly controlled things in the second half, retaining the ball and had a lot of possession, but were unable to cause any issues for our defence. On 70 minutes a counter-attack lead to a free kick to the left side of the box. Andy Tallen whipped the ball across the box which skipped past everyone off the wet surface and landed in the bottom corner to give Cullercoats a 2-0 victory.

Both sides are in action again on Saturday 5th September. Our Seniors will travel to Ponteland United, while the reserves host Red House Farm at Links Avenue. Both games kick-off at 14:30.