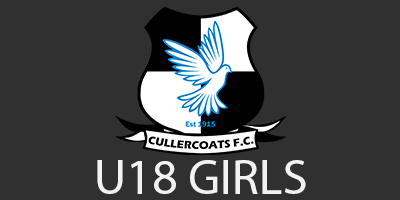 After a disappointing defeat to champions elect Cramlington Town the previous week our girls took on Cramlington Utd. Cullercoats back to a healthy squad having fell victim to the winter sickness bug the previous week.On a cold morning and with winds at gale force it was always going to be difficult to play attractive football but the doves managed to keep it on the floor and play some decent football and grabbed a 2 goal cushion lead heading into the break, thanks to debutant Charlotte Wood and Katie Lemmon respectively.
After the break Cullercoats dominated with the wind on their backs and helped themselves to a further 7 goals, Erin Kerr, Charlotte wood and Kennedi Baxter all joining in the goal fest and Katie Lemmon securing her 2nd hatrick of the season.
A great team effort from our girls.Jess smith, Chloe McKenzie were both nominated for player of the match award but the eventual winner was Charlotte Wood who had a huge impact on the game and a fantastic debut.

Cullercoats U18 Girls are sponsored by Advanced Garage Doors