Our Seniors had the fantastic opportunity to play the FA Minor Cup Final at St. James’ Park. Unfortunately losing out 1-0 to Blyth Town in a brilliant match between the top two of the Northern Alliance First Division. 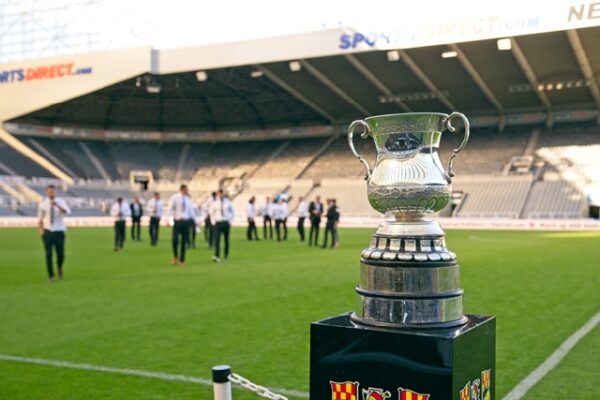 Cullercoats FC played a thrilling match against Blyth Town in the final of the FA Minor Cup, hosted at St. James’ Park.

The early stages of the game were very tense, with both teams keen to get a solid foothold in the game. The first chance of the match fell to Michael Laws. A cross was swung into the box, but was just too high for Laws to make a good connection with his header.

Cullercoats were controlling the ball, but Blyth always looked threatening when they gained possession, with a few good balls over the top of the Cullercoats defense, all of which were defended well.

Blyth came close to scoring, when Cullercoats goalkeeper Dan Gladstone came out well to sweep-up behind his defenders to put the ball out for a throw, and appeared to be fouled by the Blyth player. A quick throw in followed by a long range shot from Scott Pocklington just flew over the bar.

The game remained a cagey affair throughout the first half, with a couple of strong tackles in the middle of the park. Cullercoats had a great chance to go ahead when Chris Connor broke free of his marker to carry the ball to the byline and cut back for Michael Laws. Laws couldn’t quite get the ball out his feet to get a clean connection and his shot went wide of the target.

Both teams had few chances for the remainder of the first half, with a couple of shots off target for both teams. Just before half-time, Cullercoats were unlucky not to go ahead. Chris Connor once again took on his defender, this time cutting inside to rattle a shot against the bar.

As the players came out for the second half, it was Blyth who started the much stronger team. Just two minutes into the half it was their turn to hit the woodwork, with Liam Wotherspoon hitting a long range shot from 25 yards and crash against the crossbar.

A couple of minutes later, Blyth had another chance with a free kick just on the edge of the box. A good effort from Scot Pocklington forced an acrobatic save from Gladstone.

As Blyth continued to dominate the early stages of the second half, Cullercoats were unlucky not to go ahead. A good break saw the ball crossed into the box, and Michael Laws controlling the ball and firing towards goal, only to see his effort blocked on the line. The ball fell to Philip Smith on the edge of the box who volleyed just over the bar.

On 66 minutes, Blyth took the lead, and got what would be the only goal of the game. A long ball over the top fell to Connor Andrews, who controlled well and forced a good save from Gladstone. Unfortunately for The Doves, the save fell straight back to Andrews’ feet, who squared the ball to teammate Adam Johnson to poke in from only a couple of yards.

Just a couple of minutes later, Cullercoats had their best chance of the game to equalise. A point blank header was directed towards goal, but Blyth Town goalkeeper Scott Earle showed brilliant reflexes to divert the ball wide.

The final stages saw Cullercoats apply more and more pressure, but were unable to break through.

It was a great evening for everyone involved at the club, and was a brilliant way to end a truly fantastic season for the club.