Two second half goals ended Cullercoats U21 dreams of cup silverware on a difficult pitch at Grounsell Park. 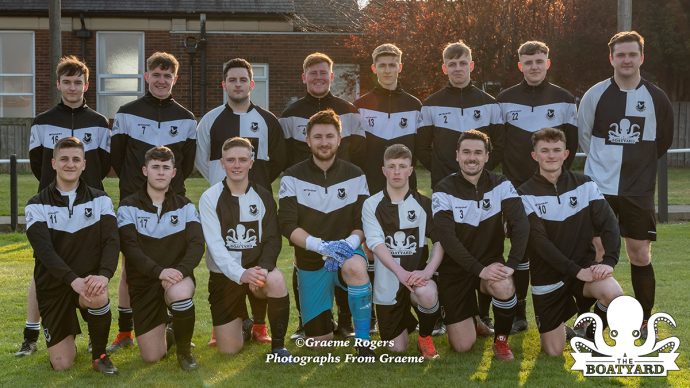 The U21s started the game well forcing a number of corners early on but couldn’t take advantage as Walker defended superbly. The lads definitely had the better chances as Dan Morton forced a great save from the Walker ‘keeper before Andy Tallen saw his 1v1 also well saved, when he looked certain to score.

Walker always looked dangerous on the counter especially in wide areas but were restricted to long range shots as the sides went in 0-0 at the break.

In a tight game like this the first goal was always going to be crucial and it was Walker who struck first early in the second half as Cullercoats were caught out.

Despite a mammoth effort the U21s could not really sustain a threat against the Opposition defence as Walker looked unshakable. Cullercoats struggled to hold the ball up in attack in order to build up play and this weakness actually led to the second goal as Walker cut through freely and rattled in a superb volley for the killer goal.

Our best period of the second half came at this point but despite a couple of efforts and a clearance off the line Cullercoats never really looked like getting back in the game.

Can’t fault the lads effort today they were perhaps a little overawed by the occasion at times. Our usual passing style was difficult to implement on an uneven surface which was extremely dry and hard. This meant we struggled badly to control the ball in midfield and attack and had to resort to long balls which were food and drink to an outstanding defence. Far from our best performance of the season, the lads gave it their all but just came up short against a side that were better than us on the day.

GK – Scott Mason 7
Assured handling and a breathtaking save midway through the second period kept us in it. Struggled with his kicking at times.

RB – Jason Hall 7
Never given a moments peace by a lighting quick winger, Jason stuck to his task well and managed to get forward on a number of occasions.

LB – Robbie Watson 7
Showed composure bringing the ball out from the back and defended well. Could’ve done with one of his goals today.

CB – Thomas Patterson 7
Helped his full back out on numerous occasions and looked assured in possession. Struggled to judge the bounce at times.

CB – Karl Charlton 7
Reinstated as skipper, won everything in the air. Grew frustrated as the game faded away. Opposition gave him MOM.

CM – Lewis Williamson 6
Suffered more than most with the conditions and couldn’t get the ball down to play his game. Never stopped running as usual.

CM – James Bromham 7*
My man of the match as he worked tirelessly throughout first half on the right and then in midfield. One of only a few that managed to use the ball well.

CM – Josh Connelly 6
Unlucky to be subbed as we searched for more legs in the second half. Did nothing wrong but another who suffered with the bobbles.

ATT – Dan Morton 7
Our biggest attacking threat first half forced a great save early on. If that had gone in, who knows what could have happened.

ATT – Alex Mcewen 6
Another who ran himself into the ground and tired as a consequence. Not really given a sniff in front of goal but did send Tallen clear with a glorious through ball.

ATT – Andy Tallen 6
Always tightly marked the opposition had done their homework. Should’ve broken the deadlock in the first half. Always a threat but couldn’t hold onto the ball in the build up play.

Kian Parker (’45; for Connelly) 7
Always lively, a clear talent and some nice touches. Introduced as a number 10 but tended to drop too deep. Moved to the right midway through the second half.

Jack Shipley (’65; for Mcewen) 7
Made a big difference when he came on as he held the ball up and got us up the pitch. Put himself in the picture.

Lumi Ballabanaj (’72; for Williamson)
Worked hard but Not much time to make an impact, came close with a free kick. Wild shot near the end that had Jonny Wilkinson proud.

Rob Patterson (’75; for Hall)
Introduced as we switched to a back 3 when chasing the game. Didn’t let anyone down.

Many thanks to Graham Rogers for his photography on the day.