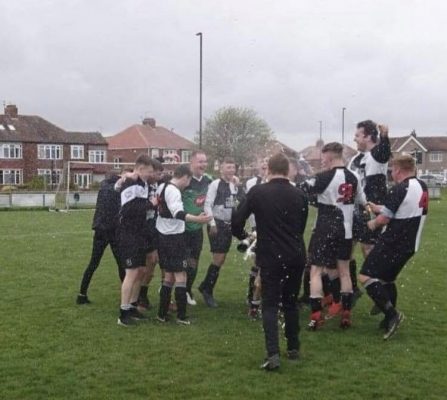 Two late goals from Andy Tallen proved the difference to send our U21s into wild celebrations and give a perfect end to their first season as an adult side.

With our usual midfield duo of Martin Cobley and Lewis Williamson both only fit enough for the bench, we went with a 3 man midfield to cover the extra running we needed. James Bromham showed his versatility by moving to holding midfield as Lumi Ballabanaj and Kian Parker flanked him. In attack Andy Tallen was tasked with taking care of two strong centre backs while Alex Mcewen was recalled on the left to complement his fellow diminutive forward on the right, Dan Morton. In defence our first choice back four were all available and Cairnsy returned in goal after a spell working.

The early stages were poor for Cullercoats in all honesty as the lads understandably looked edgy and couldn’t string two passes together as North Shields totally dominated. With our midfield struggling to get a grip on the game North Shields were able to totally pin us back for the first 20 minutes forcing 7/8 corners and an incredible fingertip save from Cairnsy onto the crossbar. On 20 minutes we managed a corner of our own and after skipper Karl Charlton made his presence felt in the box, Lumi Ballabanaj was on hand to force home the loose ball and give the doves a surprising lead.

This did seem to give the lads a boost as they finally started to grow into the game, opening up the shields defence on a number of occasions as Mcewen and Tallen forced good saves while Ballabanaj wasted the best chance close to half time with a rushed shot.

With a 1-0 half time lead the lads looked a lot more relaxed as the second half began, and with Martin Cobley introduced to give us a bit more experience in midfield we started to play a bit more football albeit without really testing the ageing Shields keeper. On 60 minutes Jack Shipley was introduced as we tried to hold the ball up more however North Shields grabbed an immediate equaliser with a close range finish as our defending was poor for probably the only time in the game.

Credit to the lads as they could easily have folded at this point but just 15 minutes later Shipley showed exactly why he was introduced as he refused to be knocked off the ball, found a pass to Tallen in the 6 yard box and it seemed as though our striker had wasted the opportunity to get a shot away. As the tackles came in somehow Shields managed to win the ball but Tallen’s determination to get it back saw him prod home his 36th goal of the season to send Cullercoats players and supporters wild!

Nerves were all around links Avenue as the doves battled to hold on despite enormous pressure from the reds. With the clock ticking down shields threw everything at us which allowed us to hit them on the break and with 5 minutes left, Tallen drew a clear foul from the Shields keeper and had the confidence to wave away Charlton’s claims for the spot kick to put the game beyond doubt at 3-1.

Absolute great scenes today these days don’t come along often and to see the lads celebrate with a shower of champagne genuinely brought a lump to this managers throat.

Special thanks to those players that have played a part this season (there are too many to mention being involved at some point). However Scott Mason and Josh Connelly both deserve a mention for playing a vital part in the run in. Both were texting during the game for updates and gutted they weren’t there!